How is it that you can wake up one day and suddenly realize you’ve let yourself go.  That is what happened to me.  Pants that had been getting tighter no longer fit at all so I stepped on my enemy, the scale, to realize I was heavier than I have ever been, including when I was pregnant.  Now I know ladies are known for not wanting to say what they weigh but I’ve never understood this.  We are what we are and we should not compare ourselves to anyone else. I was 165 pounds and a size 12. 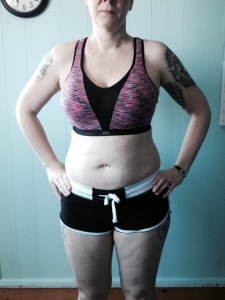 My squishy self before the 21 Day Fix program

I’ve never been thrilled with my body image but neither was I depressed by it.  I just didn’t have the drive to do anything about it.  I was great at making excuses and finding reasons not to put the effort into myself.  As a mother there are always things your kids need or want, whether those things have a monetary value or a time value they still kept me (at least in my mind) from anything close to a health/fitness plan for myself.

When I got married I weighed a mere 112 pounds soaking wet but for years I thought that was how much I was supposed to weigh. How was that possible?  I rarely ate and when I did it was all crap food.  I was also dealing with an ulcer. I may have been skinny but I was far from healthy.

Fast forward to a few years ago I started running and then playing roller derby.  I had set a goal to run the Tower of Terror 10 mile race at Walt Disney World and it kept me focused.  Honestly, any excuse/reason to go to WDW will keep me focused. I soon saw the benefits of those activities in how my clothes fit; however, with the activity came an increased appetite.  I was again eating anything I wanted, whenever I wanted.

My first ever outdoor run for a 10 km race a few years ago.

With all that activity it would seem I was on my way to healthy town but my path took a major detour.  I received a severe MCL injury from an awkward hit while playing roller derby and I was sidelined for over 6 months.  I tried to return to activity too soon and made matters worse.  The injury did a nasty number on my psyche too.  After one setback from early activity I was terrified of doing anything more that would re-injure my knee so I did nothing for over a year.

I thought that setting another goal to run a half marathon this year was going to help but without having registered for a particular race it was back to the same old same old procrastination for me. I had been hoping to register for the Wine and Dine Half Marathon at Walt Disney World but was on a plane when registrations commenced and it was sold out before I landed.

That was quite a list of excuses wasn’t it?  It is time for some accountability.

About a month ago I saw a friend, Michelle, post that she was going to be starting a fitness challenge group.  Maybe having to report in daily would be what I needed so I decided to give it a try.

Michelle is a Beachbody coach and talked to me about what I wanted to accomplish.  She suggested I try the 21 Day Fix with Shakeology.  I’m not normally one to take any type of supplement or meal replacement but figured why not give it a try, it couldn’t hurt. I appreciated that she let me purchase a few samples of flavours before I placed my order so I didn’t order something I could not drink.  I must confess I actually really enjoy the vegan chocolate especially when I add a banana and a little peanut butter.  So yummy and it does wonders for curbing my after dinner munchies craving.

The 21 Day Fix program is not what I consider a diet but more of a portion control meal plan with an exercise program.  Aside from the reduced carbs and missing my large glass of OJ every morning, I haven’t found it hard to follow.  Even when I no longer actively participate in the program I’m sure I will continue to follow the basics of the food plan and in particular pay attention to my portion sizes.  It’s amazing to think what I used to consider a proper portion size was.

The program also comes with 2 DVDs of workouts that are 30 minutes long.  These workouts are planned to cycle through all major muscle groups, while working multiple muscle groups at a time to burn more calories.  The workouts are set up in rounds with varying numbers of exercises within each round but each exercise only lasts a minute at a time with a 15 second break in between.  Easy enough right.  “You can do anything for a minute” is what the instructor, Autumn, keeps reminding us.

I really appreciated that there is a modified version for those of us who aren’t initially up to the intensity of some of the exercises.  I cannot for the life of me do a push up so the fact that there was an allowance for this eased my anxiety of the program.  Don’t get me wrong this program is not a walk in the park.  A minute worth of non-stop burpees or surrenders will get the blood pumping and if you are anything like me make you yell at the instructor on the TV as you tell her where you want her to go for thinking up this particular torture.

I’ve now finished my first round of 21 days and fully intend to do another but I am rather happy with my results to this point.

I have lost 9 pounds and 10 inches total in 21 days.  My legs no longer have that jiggle that continues for minutes after I have stopped and my pants are no longer threatening to split at the seams. 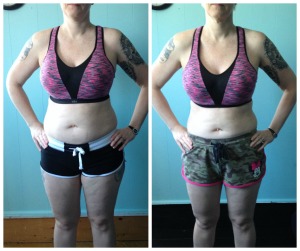 My before and after the 21 Day Fix

Another angle of before and after 21 Day Fix

I didn’t start writing this blog post with the intention of it being a promotion of the 21 Day Fix but rather a commentary of my journey; however, the program has been a large part of my recent success and I would recommend it to anyone who wants to make a change and is willing to put in the effort to get the results they want.

I fully intend for this lifestyle of clean eating and exercise to be a permanent change and I’m looking forward to the future.